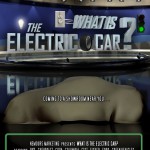 There will be two FREE “What is the Electric Car?” events at the Ashland Library.  The first is a screening of the film at 7PM, June 11th.  The second will be a panel discussion & book signing from 3PM to 4:30PM, June 14th where there will be several all-electric vehicles on display in the library parking lot before & after the event.

There will also be a FREE raffle with almost $200.00 in prizes including free books, DVDs, and an original, signed & framed print from Roel Cancio who created all the original artwork for the book: “What is the Electric Car?… 79 REASONS to Drive Electric”.

Members of the Electric Auto Association and Plug In America will be on hand to answer questions about the newest electric vehicles (and “plug-in” hybrids now made by all the car manufacturers) on display at this one-day only event.

Several Authors of the new book “What Is the Electric Car?… 79 REASONS to Drive Electric” will also be on hand as well to autograph books for those interested. This one-day family friendly event (open to all ages) will include a Q & A panel featuring several electric car owners.

This event will also be a chance to meet several of the book Authors and take pictures while speaking to them about their “electric” vehicles. Several other electric car owners will also be attending (with their 100% electric vehicles) at the “Electric Driveway Party!” held in front of the library immediately following a screening of the film trailer and a special Q & A panel, which starts at 3:00pm in the library’s community room.

The new book is a spin-off of the documentary film that was voted an Omni Award & a Dove Foundation Award.

This exciting free event including the “Electric Driveway Party!” will be one day only (Saturday, June 14th) from 3:00pm – 4:30pm and includes the electric car display, a preview of the film trailer, and a Q & A featuring several of the book’s Authors fielding questions from the audience about electric cars and the brand new “plug-in” hybrids being offered in 2015!

There is NO admission fee & no purchase necessary to attend this FREE event. For more info visit www.WhatistheElectricCar.com, our “What is the Electric Car?” FaceBook page, or contact Scott at 310-855-3362.