Volvo’s first electric vehicle, the Volvo XC40 Recharge, is a finalist for Green Car Reports’ Best Car To Buy 2021. It shows all the signs of carrying over Volvo’s hallmark personality traits, and the company is stepping up to make this model an opening act, not a one-act wonder. Learn more. 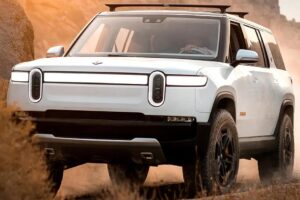 Rivian is an all-new electric-vehicle manufacturer headquartered near Detroit and is primed to set the automotive world on its head with its all-electric truck (the R1T) and its all-electric SUV (the R1S). Rivian looks so promising that Amazon invested $700 million and Ford Motor Company invested $500 million. Look for the Rivian truck to debut first, with production slated to begin sometime in 2020; the Rivian SUV will follow later. Both vehicles will be ready for rough terrain and semi-autonomous-driving capability, although hopefully not at the same time. Learn more.

The GMC Hummer EV SUV will likely have a similar price structure as the pickup variant, which will cost between $79,995 and $112,595 depending on trim and powertrain configuration. General Motors received 10,000 pre-orders for the Edition 1 pickup within ten minutes, and it is entirely possible that the same thing will happen when the SUV becomes available to pre-order. Learn more.

Suffice to say, the Mustang Mach-E is one of the, if not the, most controversial cars that were introduced in 2019. It’s an electric vehicle and an SUV with a Mustang badge – semantics that didn’t sit well with a number of Ford patrons and certainly not among the pony car’s fans.
But if you’re among those who accepted the idea of an electric Mustang crossover, you’d be glad to know that there’s a possibility of a faster, more powerful Mach-E, possibly even exceeding what the Mustang Mach-E GT Performance Edition offers. Learn More.